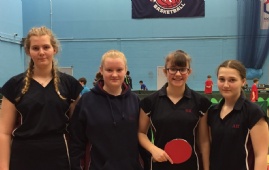 Well done and commiserations to our Under-16 table tennis team who recently took part in the school's regional finals in Bristol.

The girls battled well in their ties, which included a victory against Wallington and a defeat against Prince Henry.
They finished runners-up overall and won't, on this occasion, be taking part in the Nationals in Hinckley later this year.

However, team member Saskia will be representing the school and Kent in April at the National Schools Individual Championships in Wolverhampton.

Outside of school, Saskia and teammate Abbie will be playing for Kent on 22 February for the Cadet Premier County Championships.

Well done to the whole team.