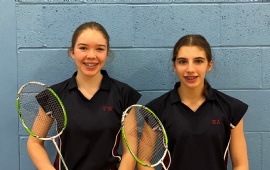 Students played in both singles and doubles matches against students from the Sevenoaks School. Our Key Stage 3 team won all five matches and our Key Stage four team won four out of five games. Both teams have been successful in going through to the Finals which will be held at Medway Park later in the year.  Well done to all involved.