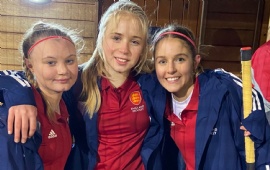 Lottie, 14, is thought to be one of the youngest players to have turned out for England's Under-16 team, when they took on Ireland in a series of matches at Lilleshall. England won both matches (1-0 and 5-0) and Lottie played up front in both.

Mum Ruth said Lottie has been playing hockey since she was eight years old and added that the Weald student was over the moon to make her international debut.

"We are so proud of Lottie", Ruth said. "I think she is the youngest player in the squad and she was so pleased to play for England."

Lottie usually plays for HC Knole Park and, Ruth admits, she one day hopes to play for England at senior level.

Well done Lottie, from everyone at Weald of Kent.